There’s good reason that some of the finest early Canadian art was inspired from the view from a voyageur canoe. These historic watercraft were a key component of the country’s early development with the fur trade, and the voyageur route from Montreal to the Canadian interior captured the grandeur of the wild New World. Two centuries later, a new photography workshop means makes it still possible to become immersed in the legendary scenes of Frances Anne Hopkins and Paul Kane—on the north shore of Lake Superior in a replica voyageur canoe. 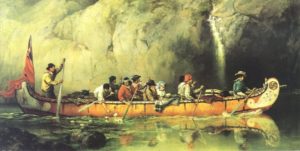 Naturally Superior Adventures and award-winning photographer Ariel Estulin have teamed up to develop a unique fusion of photography instruction and adventure. The Spirit of Superior photography workshop combines active learning with a professionally guided and fully outfitted 5-day voyageur canoe trip. The route retraces the journey of the French Canadian voyageurs on the wilderness coastline of Lake Superior Provincial Park—a magical place of sand beaches, towering cliffs, mysterious islands and spectacular sunsets. Whereas early artists Hopkins and Kane captured these timeless scenes with oil and canvas, you’ll record your own masterpieces in pixels.

Estulin’s career was inspired by the work of legendary landscape photographer Freeman Patterson. On this trip, Estulin will share the fundamentals of composition and offer tips on how to make the most of a digital camera’s capabilities. Each evening, he will facilitate a critical review of the day’s images on iPad tablets—imagine doing that in the days of the fur trade! Registration is capped at 10 participants to allow one-on-one instruction.

The course complements Naturally Superior Adventures’ suite of photography workshops hosted at Rock Island Lodge, and targets more adventurous photographers. The huge capacity, stability and efficiency of the voyageur canoe means participants can pack all of their photographic gear, travel safely on Lake Superior’s big water and even record images from the boat. Gourmet meals and high-quality outfitting equipment round out the experience, which is scheduled to take advantage of the best weather of the summer.

This year, as part of Canada’s 150th birthday celebrations, Ontario has launched the #paddleon campaign to highlight the canoe as an icon of Canadian heritage. Ontario Tourism developed The Canoe, a cinematic film by videographer Goh Iromoto that explores the various ways this humble watercraft represents Canadian values. “If it is love that binds people to places in this nation of rivers and this river of nations,” concludes the film’s narrator James Raffan, a distinguished author and past director of the Canadian Canoe Museum, “then one enduring expression of that simple truth is surely the canoe.”

What better way to take part in this intriguing and uplifting vision of Canada then to set off this summer on a journey by canoe? Better yet, make your trip in a voyageur canoe, the historical vessel of the Canadian fur trade, in which individual paddlers come together in one boat to achieve a great goal. Naturally Superior Adventures is excited about the 2017 Voyageur Canoe Brigade as a means to recreate the voyageur experience and commemorate Canada’s cultural heritage on Lake Superior’s wilderness coast.

The fur trade was Canada’s first industry, starting in the mid-1700s and lasting nearly a century. It relied on trading posts scattered throughout the north country to gather fur from trappers. The Northwest Company recruited young paddlers to pilot brigades of big 26- to 36-foot birchbark canoes across the country. The voyageurs were like long-haul truck drivers, delivering trade items like beads, metal pots and muskets to trading posts and returning to Montreal at summer’s end with canoes brimming with valuable furs. For their exploits they emerged as early Canadian folk heroes.

Our voyageur canoe is a 36-foot fibreglass replica of a canot-du-maitre, the fur trade canoe traditionally used on the Great Lakes. It’s about the length of a school bus, propelled by 10 to 16 paddlers and designed to be stable and seaworthy in waves. Most importantly, in the fur trade days and now, it’s capable of holding up to four tons of cargo—a valuable asset since the five legs of our journey from Agawa Bay to Thunder Bay range from 5 to 10 days of wilderness paddling.

Ultimately, the voyageur era ended before Confederation. Fur lost its fashion appeal in Europe in the 1840s, just as the construction of locks on the St. Lawrence Seaway made freight canoes obsolete in favour of large ships. But the image of hardy, wilderness travellers—the voyageurs—remained as a pillar of Canada’s vibrant canoe culture.

This summer, Naturally Superior Adventures is honoured to wear the badge of Ontario’s Canadian Canoe Culture program. We believe in the canoeing’s values of personal challenge, wilderness exploration, making real connections, sharing knowledge and being proud to be Canadian. Pick up a paddle and share your experiences on Ontario’s myriad waterways with the #paddleon hashtag.

In the Wake of the Voyageurs: Celebrating Canada’s 150th Birthday on Lake Superior

A nation emerged in the wake of birchbark canoes, the engines of the fur trade—Canada’s first industry. The canoe epitomizes our history. What better way to celebrate Canada’s 150th anniversary than to paddle the voyageur highway?

Naturally Superior Adventures’ Lake Superior Voyageur Canoe Brigade consists of six guided, all-inclusive wilderness adventures by 36-foot replicas of the North West Company’s “canots de maître.” These canoes are seaworthy and easy to paddle for all levels of outdoor enthusiasts. Each leg of the journey will consist of up to 12 participants (“milieu” in voyageur speak) and experienced guides. Starting July 2nd in Lake Superior Provincial Park, each brigade will travel 5- to 10-day legs, finishing August 19 at Old Fort William Historical Park, near Thunder Bay.

Here’s are three highlights we’re looking forward to on this year’s trips:

#1 Paddle with the Happy Camper – Celebrate Canada Day with a voyageur canoe trip on the wonderful coastline of Lake Superior Provincial Park—with popular canoeing personality and author Kevin Callan (aka The Happy Camper). This 6-day trip has a little bit of everything: Stunning sand beaches, rugged headlands, great hiking and secluded coves.

#2 Becky Mason on the Pukaskwa – Join the daughter of legendary Canadian canoeist, filmmaker and artist Bill Mason on this 10-day journey into the heart of Lake Superior’s greatest wilderness. Becky is an acclaimed canoe instructor, painter and environmentalist who carries on her father’s legacy.

#3 En Route to the Great Rendezvous – We couldn’t think of a better guest than Thunder Bay-based singer-songwriter and historian Rodney Brown for the final leg of our journey, which ends at enchanting Fort William Historical Park—a recreated fur trade post where time stands still.

Each leg of the brigade has its own appeal, from the austere landscapes of Lawren Harris Country on the North Shore, the mystical Rossport Islands and the lonely island lighthouses of the remote waters of the Lake Superior National Marine Conservation Area. Join us this summer—each trip promises to be an experience you’ll never forget.

Tales of an Empty Cabin

The bleached cabin walls are barely visible through a screen of tall cedars. We pull the canoes ashore and investigate. The tiny A-frame could very well be the haunt of fairies, with its miniature door and sofa-sized front porch. Exterior walls of split cedar shakes bristle with spikes, a common northern tactic to deal with marauding black bears. The entire structure, barely the size of a queen-sized bed, is perched atop chest-high posts. We wonder about the cabin’s origin, hidden in the deepest wilderness of Lake Superior Provincial Park, in the headwaters of the Sand River.

Lake Superior’s Sand River is renowned for its easy rapids, scenic waterfalls, rugged portages, feisty brook trout and abundant wildlife, including moose, beaver and many varieties of songbirds. These features make it one of the best spring canoe trips on Lake Superior’s north shore, suitable for all levels of canoe campers—so long as they’re fit enough to handle numerous portages. Aside from the Sand’s natural wonders, this enchanting little cabin speaks to the imagination and captures the essence of the mysterious North.

As it happens, there are four “snowshoe cabins” scattered across the upper Sand River. Between 1949 and 1954, a group of outdoor enthusiasts constructed these tiny huts to be used as shelters along a network of winter trails, under the supervision of “Snowshoe Man” Les Perrine. The Sand River trails were meant to connect with previously established trails along the Montreal River, creating a 150-mile network “modeled somewhat after the Appalachin (sic) Trail,” wrote Perrine in a 1966 letter to the Wawa office of the Ontario Ministry of Natural Resources.

The cabins were set on stilts to facilitate entry in the deep snows of winter. Their small size made the quick to heat with a woodstove in the deepest cold. Michigan-based outdoor adventurer Michael Neiger, who obtained copies of Perrine’s correspondence and published them online, notes the average size of the snowshoe cabins was barely five by 10 feet. “The sleeper can start the morning fire while still in the sleeping bag,” wrote Perrine. “In 15 minutes the cabin is warm even when 40 below zero outside.”

After inspecting the cabin and musing about its history, we return to our canoes. Besides keeping our eyes peeled for wildlife, we vow to scan the shoreline for more vestiges of the long-forgotten snowshoe trail. The cabin instantly disappears into the shoreline as we drift downstream, just as it should.

See the snowshoe cabin for yourself. Sign up for Naturally Superior Adventures’ fully guided five-day canoe trip on the Sand River in Lake Superior Provincial Park.

It’s thought that White’s book turned Group of Seven painters A.Y. Jackson, J.E.H. Macdonald, Lawren Harris and Arthur Lismer onto the Agawa. The artists accessed the region via the Algoma Central Railway between 1918 and 1922. They spent their days sketching from canoes and high rocky vistas and then compared notes while camped out in boxcars on chilly spring and fall nights. MacDonald’s “Solemn Land”, Lismer’s “Somber Hill, Algoma”, Harris’ “Algoma Hills” and Jackson’s “First Snow, Algoma” are the notable results of this definitive era of painting.

Macdonald’s assertions that the Agawa was “the original site of the Garden of Eden” and “a little Yosemite” still ring true today. Many tourists are familiar with the Agawa Canyon Tour Train, which ushers fall colour enthusiasts on a day trip with a brief layover the old station house at Mile 114. Whitewater canoe fanatics, however, get a more intimate experience with the wild Agawa. Each May, Naturally Superior Adventures offers a long-weekend outdoor adventure combining whitewater canoe instruction with a two-day wilderness canoe trip on the Agawa River.

After a day of training on the Michipicoten River we load our canoes and board the same passenger train that carried Jackson, Macdonald, Harris and Lismer. After a two-hour ride, we disembark at Canyon Station and set off downstream. Novice- and intermediate-level rapids punctuate the Agawa’s 25-kilometre (15-mile) descent to Lake Superior; we’ll also portage around an old logging dam and spectacular Agawa Falls. En route, we’ll overnight at a wilderness campsite in Lake Superior Provincial Park within ear- and eyeshot of the cascading river. The whitewater thrills continue the next day, as the canyon walls slowly peel away from the river and steady current pulls us steadily to trip’s end at Lake Superior’s Agawa Bay.

Last night, we were fortunate enough to host a group of 8 canoeists undertaking a project called Trans CanEAUda. Through the spring, summer and fall they are attempting a 7000km paddling expedition from Ottawa, ON to Inuvik, NWT, as a way to raise awareness about water issues in Canada, and to raise funds for the Canadian Parks and Wilderness Society (CPAWS) and the Ottawa Riverkeeper. The group of friends all have a variety of reasons for undertaking the trip, but the common thread is their love of nature. It was awesome to talk to them over dinner – they definitely left a mark on all of us here! Follow their expedition at TranscanEAUda or find them on Facebook. They have a SPOT device with them so you can track their progress for the duration of their trip! Thanks for stopping in. Good luck!