Perched on the rocky point of Agate Island, I could make out the towering cliffs of nearby Talbot Island. Ten minutes later, they were gone. Another ten minutes passed, and the cliffs returned only to disappear again as the fog patches came and went with the gentle breeze.

We were midway through a nine-day sea kayak trip from the tip of the “Sleeping Giant” peninsula to the fishing village of Rossport. We had arrived last afternoon, crossing the Nipigon Strait with little trouble. My maps are scratched with notes of “Danger!” “Waves!” “Wind!” “Caution!” at key points from guides before me. The strait was one of them. We were now in the relative shelter of the massive St. Ignace Island, camped among the islands dotting its southern shore. Each unique island is rich with history, geology and biodiversity. The trio of Agate, Talbot and Paradise Islands are some of my favourites on Lake Superior.

Our route would take us beneath the towering cliffs of Talbot Island’s north shore. Passing in the shadow of the overhanging rocks brings a reminder of the relative scale of geological time: bare marks on the rocks note where pieces the size of large trucks have broken off and crashed into the waters below. A look down to the crystal-clear bottom shows exactly where these chunks have fallen. They may have tumbled centuries ago but the fresh marks look like it could have just happened. 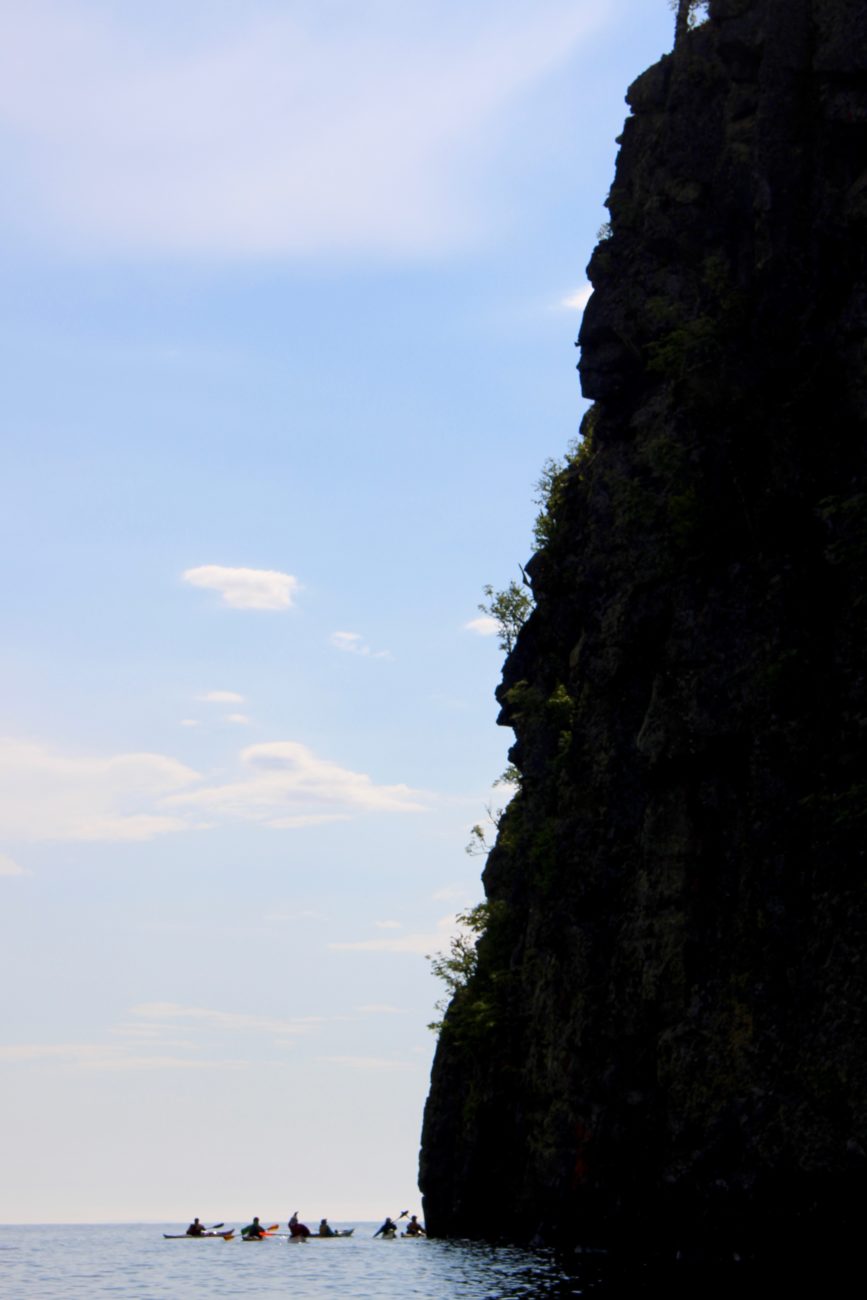 Reading into the perilous history of lightkeepers on the island will amplify that feeling.

The “St. Ignace Lighthouse” on Talbot Island was home to the first lighthouse on Lake Superior. Built in 1867, a white wooden tower on the east end with three lamps served as a beacon to ships passing through the shoal-filled, often foggy waters of the archipelago. The lighthouse was short-lived, abandoned in 1872. The tragic stories of the individuals who maintained it during its lifetime earned it the name “The Lighthouse of Doom”.

In its brief operating existence, the St. Ignace light claimed the lives of all three keepers. In mid-December of 1867, the lone keeper William Perry closed up and left his post in an open-sailboat. He headed west, towards the Hudson Bay Company post in Nipigon to wait out the winter. Lake Superior is notorious for its early winter storms and Perry never arrived. The following spring, his boat and body were found washed ashore.

Thomas Lamphier and his Ojibwe wife filled Perry’s vacancy. In most recent writings on the topic, his wife is referred to nothing further than “Mrs Lamphier”. To avoid meeting the same fate as Perry the couple brought sufficient supplies to bunker down and remain at the light station for the winter. Tragedy struck when Thomas Lamphier suddenly dropped dead. With the ground frozen, his wife had no way to bury his body. It was too late in the season to leave the island, so she wrapped her husband in a canvas cloth and tucked the body into a crack in the rock. She survived the winter and was picked up by a passing group of Ojibwe travellers that she desperately flagged down. Her hair had been jet-black when she was seen the autumn before; the stress and grief of that desolate winter caused to turn snow-white.

Andrew Hynes took over as the final lightkeeper on the doomed island. He managed it until autumn of 1872 when he packed up to sail west for Fort William, one half of what is now Thunder Bay. Like many men before him, he was deceived by a window of clear weather. Once on the water, an autumn storm kicked up, sending him off his path. A 90-kilometre journey took 18 days, and when he washed ashore at Silver Islet, he was delusional; he died shortly after landing. After Hynes’ death, the Canadian Coast Guard decommissioned the deadly lighthouse.

Across the Great Lakes, lightkeepers’ jobs were eventually rendered obsolete as automation technology advanced and GPS systems became more common. Many of the lights remain but the buildings are being left to fall back into the earth.

The only evidence of the lighthouse’s existence on the island is the faint outline of a rough and decaying foundation. Thomas Lamphier’s grave is still marked at the end of a rough footpath on nearby Bowman Island, behind the abandoned fishery.

It has been hinted that part of the seemingly cursed history of the keepers could relate to the decision to build on an island which is sacred to the local Ojibwe. Many spaces where dramatic cliffs meet the water have been identified as sacred. Examples of this include pictograph sites at along the Nipigon River and at Agawa Rock. Talbot Island also bears a striking resemblance to “Devil’s Warehouse Island”, a name christened by missionaries in an attempt to dissuade First Nations from participating in traditional ceremonies and practices at the site. Cursed or not, a tobacco offering at sights such as these acknowledges those who travelled the waters before us.

Glucose-fueled Greatness: The Dog River Day Trip The Facts on Plastic: Lake Superior is not immune