A Brief History of the Rock to Rock

Like any good legend, the Rock to Rock challenge has obscure origins. Best guess is that it was dreamed up in the early 2000s by a few Naturally Superior Adventures’ sea kayak guides looking to test their paddling stamina against the prowess of the fur-trading voyageurs. In good weather, a 90-kilometre run from Agawa Bay to Michipicoten on Lake Superior’s eastern shore would be a reasonable day for a 36-foot canot du maître. The modern equivalent—a sea kayak marathon from Naturally Superior’s Rock Island base to the towering granite canvas of Agawa Rock—become a few crazy sea kayak guides’ holy grail. 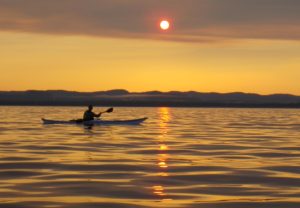 This year, Naturally Superior director David Wells, along with guides Brendan Kowtecky, Jake O’Flaherty and Paul Whipp completed the fifth-ever Rock to Rock and set a new speed record in the process. Graced by a friendly tailwind, Brendan and Paul touched down after 11 hours and 16 minutes and David and Jake finished in 11 hours, 21 minutes.

Here is a synopsis of Rock to Rock challengers:

Celebrating the summer solstice, Conor and Sebastian launched from Naturally Superior around 7 pm and paddled through the night, stopping several hours to cook a hot breakfast of spaghetti on Devil’s Warehouse Island. The prolonged rest only extended the suffering. They landed near Agawa Rock approximately 16 hours after setting out.

In another overnight solstice epic, Conor and David departed Rock Island around 5 pm and paddled through the night. Fuelled by cans of cold baked beans, they reached Agawa Rock at 7 am the following morning, passed out on a rocky island for several hours and then completed the journey to Agawa Bay by noon. Quotable moment: “If you tip over, don’t expect me to rescue you.” (Wells to Mihell, 4:30 am.)

Conor and Ray set off at sunrise on the summer solstice, and discovered that combining Ibuprofen tablets with fresh Lake Superior water on regularly-scheduled nutrition breaks eliminates most of the pain and suffering of an 80-kilometre-long paddle. In glassy calm conditions, the friends completed their mission in a record-setting 11 hours and 40 minutes.

Another dawn departure and a beautiful tailwind pushed a foursome of paddlers to a new Rock to Rock record. Rounding Baldhead, after 60 kilometres of paddling, David urged his younger companions to venture offshore. The group skirted the Lizard Islands directly to Agawa Rock, making the most of the following sea. Brendan and Paul finished in 11 hours, 16 minutes and David and Jake landed five minutes later.