From Traci-Lynn Martin continuously paddling all Great Lakes to the Jamie Sharp and Jillian Brown’s tandem descent of the Grand Canyon, 2017 saw some sea kayak expeditions that would make the average person question the expeditionists’ sanity. I guess this trip could be considered one of those.

On July 31st, as the sun began to peek up over the bluffs of Michipicoten Bay, three tandem kayaks slipped into the water and pointed west. The kayaks were jammed with inflatable pool toys and enough sugary snacks to give Willy Wonka a toothache. Sophie Ballagh and Ewan Blyth in one boat; Peter Moule and David Wells in another; and Vincent Paquot and myself in the third. We had one goal: To get to the Dog River and back to Rock Island Lodge before sundown.

The Dog River Day Trip (DRDT) is Vince’s dream. When proposed to the other guides, it took very little persuasion for a commitment. The date was set, snacks were bought, and boats were packed: the team was ready. 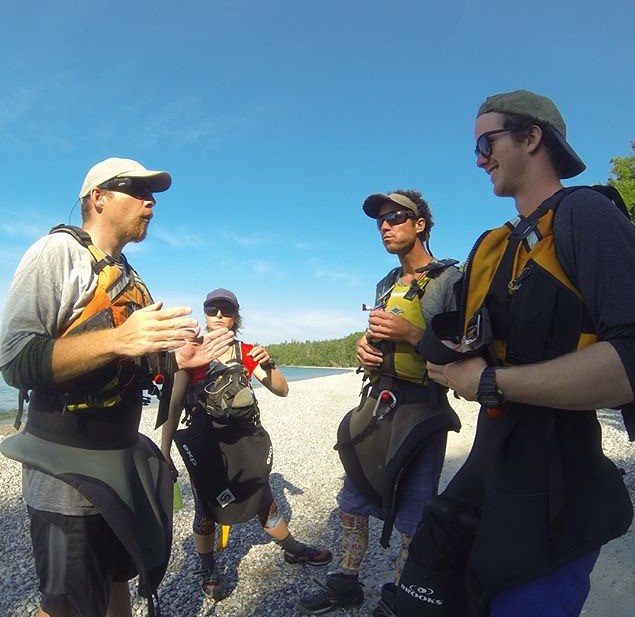 The morning started off beautifully, with flat waters and clear skies. The temperature warmed up quickly as the group rounded Perkwakia Point. The first stop happened just after Minnekona Point on a secluded beach. Layers were dropped and the Jujubes made their first appearance. It was approximately 8:00.

We continued to paddle on, with the tandem kayaks coasting effortlessly along the Superior Highlands shoreline. Sophie and Ewan’s boat began to push ahead, Sophie’s full-face whitewater blade dipping furiously into the water. In an effort to reduce drag, Vince and I lifted the rudder, exchanging control for speed in their Passat G3. David and Peter’s boat continued on its course,

By 11:30 the group reached the mouth of the Dog River. They paddled up as far as they could, pulling off on a gravel bank and unloading the boats. The middle hatch of Vince and I’s boat opened to reveal a soft cooler with lodge leftovers and PB&J wraps, but more importantly Hostess brand Ding-Dongs and Ho-ho’s. With 42 grams of sugar in each 72-gram serving, these cake-based treats fuelled this mini-expedition, mailed in a surprise package from friends across the border.

The group had made it to the Dog, but now the crux of the journey was facing them. The high water allowed for a chance to do something which has not occurred in recorded history: float the lower section of the river from the foot of Denison Falls back to the boats in blow-up pool toys. The arsenal of vessels included two Explorer 100 single man rafts and their sister vessel, a raft christened as the Tropicana 100. The larger, packraft style Explorer 200 came complete with oars and would serve as our mothership. Completing the quiver were a large inflatable swan and lounge chair. They were packed into a daypack and the team began to hike. Remembering to always be prepared, I put one white fudge Ding-Dong in my PFD and one more in my mouth.

On reaching the falls, all members took some time to explore the cascades while reflecting on the journey, and mentally preparing for the descent which loomed soon. Ewan and I swam to cool off and calm our nerves.

After scouting the drop at the foot of the falls, Ewan found a line. He blew up his Tropicana 100 as the film crew got into position. Vince and I set up safety as a summer camp group who happened to be hiking the falls looked on with excitement and confusion. Ewan’s descent started off promising, but the boat was no match for the rushing water and he slipped out mid-drop.

The safety crew worked quickly and efficiently, pulling Ewan and his boat in before they drifted into the impending swifts and flat water below. Impressed by his bravado but aware of the hazards, the rest of the group decided to put in below the drop.

The afternoon sun was now beating down on us as we pumped up our rafts. Peter and I took the Explorer 100’s, with Vince manning their big brother, the 200. Dave took the inflatable lounge chair and Sophie would lead the pack in the inflatable swan. With a cheering send-off from the summer camp, one by one we floated down the Dog River.

The river steepened as the toys bounced through the swifts. Vince’s packraft performed quite well, but we were all amazed at the agility and versatility of both the lounge chair and the swan. Shallow in some parts, we had to take care to not bounce our tailbones off the river rocks while running the lines. Sophie and the swan led the charge, finding lines to navigate the 1300 metres of swifts. My heart was pounding as adrenaline and riboflavin surged through my veins.

The end of the river run found us facing a 2-foot slide with a standing wave at the bottom. Each team member ran it on their vessel before trading off to try other ones. After many attempts members managed to surf the lounge chair and swan, indicating potential for future whitewater playfloating.

It was now nearly 3:00 and the group needed to begin to head back. We loaded ourselves into the tandems and pointed east with the white swan strapped to Ewan and Sophie’s kayak. We happened to be passing NSA friend Joel Cooper, who snapped a picture from his motorboat.

It may have been the dopamine levels dropping but the paddle back was wearing on the group. Sensing this, Vince pulled out a tub of fuzzy peach rings. I made a mental note to book a dentist appointment after the trip. We continued on, racing the sun as it inched its way toward the horizon.

By 19:00 we were at Perkwakia Point, and sugar levels were dropping rapidly. Four kilometres away from Rock Island, Vince called the three tandems together to raft up. Tears welled up in his eyes as he thanked us for making his dream a reality, and with great honour he bestowed us a token of appreciation for the soon to be completion of the inaugural DRDT, Ring Pops.

We paddled into the Michipicoten River mouth to be greeted by the staff who graciously covered for us while we took a day off at the height of the season for this ridiculous journey. The tandems touched the beach at 8:00, completing the 50 kilometres of paddling, 3 kilometres of hiking, 1300 metres of floating and endless amount of silliness in around 14 hours. The team kicked back and enjoyed a glass of Speckled Hen Christmas Ale and recounted the day.

The participants of the first annual DRDT would like to thank the following unofficial sponsors: The Wawa Bargain Shop, Young’s General Store, Hostess, and Judy Moore for providing the Speckled Hen that she found in her garage.